After the introduction of JioPhone and Airtel’s Karbonn A40, India based mobile phone manufacturer Micromax has launched a 4G feature phone in collaboration with state-run telecom operator BSNL. The feature phone is named Bharat 1 and will compete directly with the aforementioned JioPhone and Karbonn A 40. 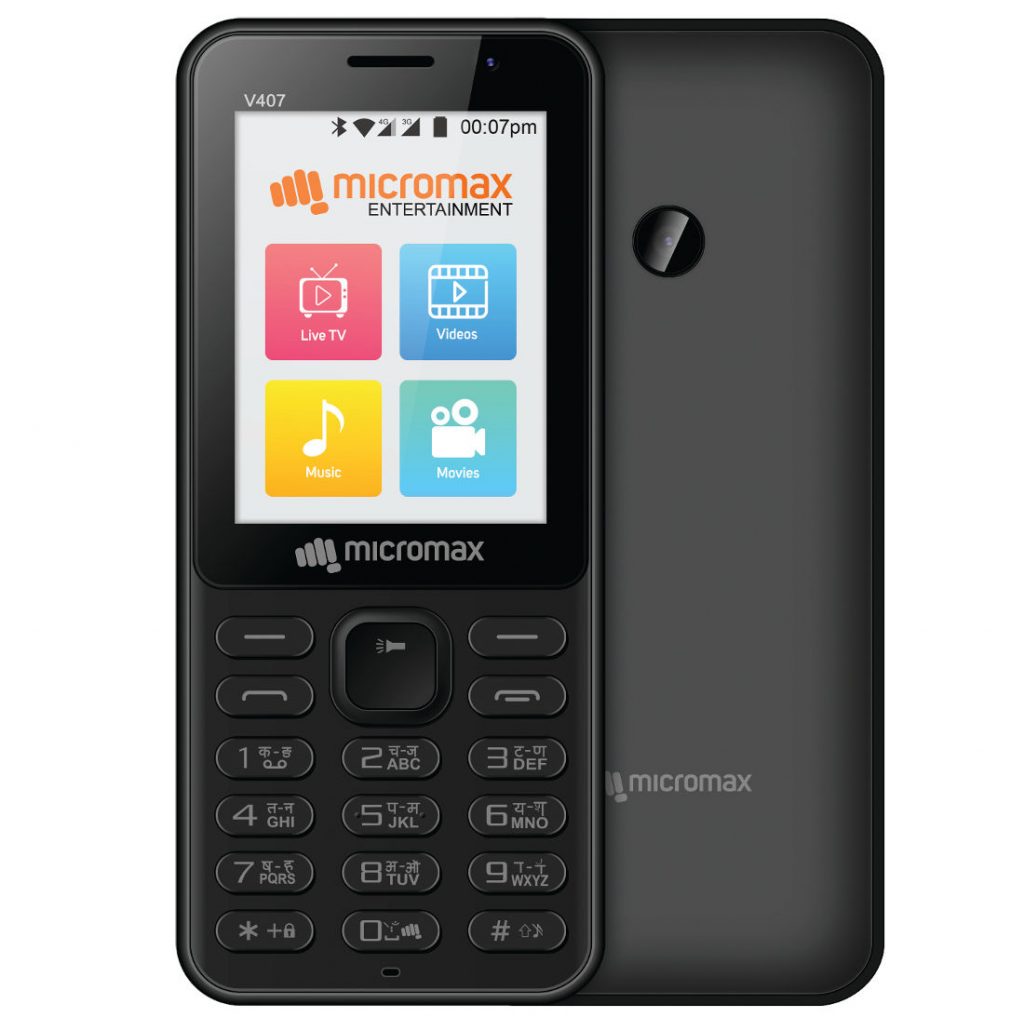 Bharat 1 is marketed as ‘Desh ka 4G phone‘ and will be available for purchase from retail stores at a price of INR 2,200 starting from October 20. The main thing to note is that Bharat 1 does not come with refund offers like its competitors do. Once you buy the phone it’s yours and you are free to do anything with it.

BSNL has introduced a custom plan for Bharat 1 users which provides unlimited high-speed data (up to 5GB, after that 80kbps) and unlimited voice calls for Rs.97 valid for 28 days.

Micromax Bharat 1 features a 2.4-inch QVGA display, a Qualcomm Snapdragon 205 chipset which supports 4G and VoLTE, coupled with 512MB RAM and 4GB storage (expandable up to 32GB via microSD). It is equipped with a 2MP main camera and a VGA front-facing camera. The phone is powered by a 2,000 mAh removable battery which charges via a micro-USB port. A headphone jack is also present here. It has a tile-like interface which is reminiscent of the old Windows phones.

Apart from 4G and VoLTE, the phone has support for 3G, 2G, Wi-Fi, Bluetooth, GPS and it also has a wireless tethering option which is interesting. Unlike JioPhone, it does not come with an option to connect it to a TV nor voice recognition features.

Bharat 1 is a dual SIM handset in which users can pop in a SIM card from any network provider and it should work without any issue. It has support for 22 local languages and provides buyers access to 100 live TV channels, a ton of songs and videos. The handset comes preloaded with BHIM app which can be used for UPI based payment purposes.

How does it fare against the JioPhone and Karbonn A40?

For comparison, JioPhone comes with a 2.4-inch 320×240 display, powered by a dual-core Snapdragon or Spreadtrum SoC, 512MB of RAM and 4GB internal storage (expandable via microSD). There is a 2MP rear camera and a 0.3MP front camera.

The phone is powered by a 2000mAh battery. It works only on 4G networks (only with Jio SIM) and has support for VoLTE, Wi-Fi, and Bluetooth. JioPhone also supports regional languages and voice recognition. It is priced at effectively zero, but users have to pay Rs. 1,500 up front, which will be refunded on return of the phone after 3 years.

While JioPhone and Bharat 1 are feature phones, Airtel’s Karbonn A40 is an Android-based smartphone, featuring a 4-inch 800×480 touchscreen display, powered by a 1.3GHz quad-core SoC, 1GB RAM and 8GB storage (expandable via microSD).

On the camera front, A40 packs in a 2MP rear camera and 0.3MP front camera. Karbonn A40 also has dual SIM support. It is powered by a 1,400mAh battery and runs Android 7.0 Nougat so you can expect all features that an Android smartphone offers.

Anyway, you have to go through the terms and conditions before purchasing the Karbonn A40 or JioPhone either for yourself or for someone you know.

Also, let us know your thoughts on Micromax Bharat 1 in the comments below. Do you think these “smart-feature phones” will help in bringing more people online?